Druwez is a GTK based graphical printing tool written in Python.

With Druwez you can use drag & drop or the clipboard to print multiple files at once from the file manager without opening any dedicated applications.

You can optionally save print jobs to print them later (again). Only the file names but not the file content are saved in that case so you don’t need much disk space.

Druwez itself can handle PDF, PNG, JPEG and SVG files. To print other file formats you can define converters. A converter is a shell command that reads a file and writes PDF, PNG, JPEG or SVG data to standard output. For each converter you define shell patters for the files it should convert.

By default Druwez use unoconv as converter for various office file formats and Ghostscript for PostScript files.

This is the first public release of Druwez. It works for me but most likely still has some bugs, and the user interface needs some improvements.

Please file a bug report if you find a bug or have an idea how to improve Druwez. This will help me to me Druwez better. Thank you!

Here are some screenshots: 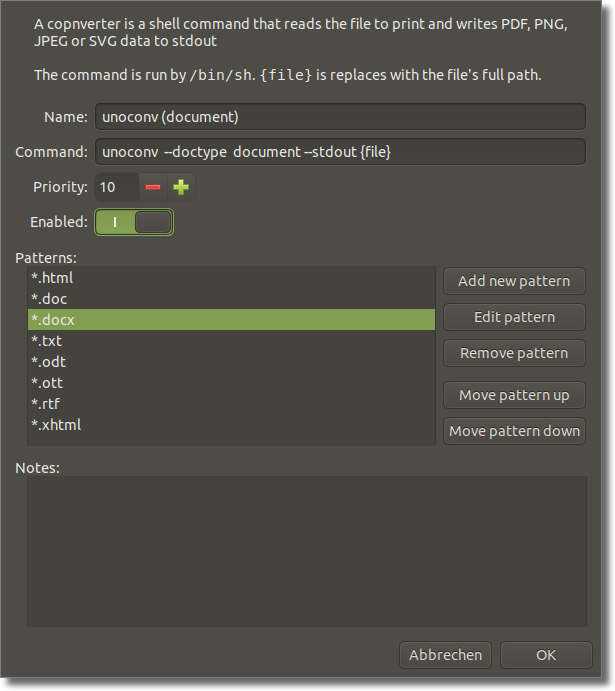 Druwez works on Linux and other Unix and Unix-like operating systems.

The following programs are used by the default configuration as converters. You can use Druwez without them if you don’t need to print those file types or want to define your own converters.

If you install the .deb package this packages will be automatically installed if needed.

In addition you may want the following packages to get the default converters (the .deb package has a „Suggests“ dependency on then):

You can use Druwez under the conditions of GPL v3 or later.

Druwez is available from the PPA (“Personal Package Archive”) ppa:diesch/testing for all current versions of Ubuntu. If you add this PPA to your software sources Ubuntu’s Update manager will automatically install newer versions of Druwez when they are available.

See the pip documentation for how to install pip if you don’t already have it.

to install Druwez. On some systems you may have to use pip instead of pip3. See the pip user guide for more about how to use pip.

The source code is available from the Git repository at Lauchpad

Please use English or German language if possible.

If you want to help to translate Druwez to other languages go to the translation page at Launchpad.

To see the list of people who contributed to the translations you are using go to About –> Credits .