Unsettings is a graphical configuration program for the Unity desktop environment that lets you change some oft the Unity settings.

Unsettings can only change your users’s settings, you can’t use it to change global settings or do anything else that needs root privileges.

You can use Unsettings to change the themes for GTK, window manager, icons and cursors. But it doesn’t support the installation of new themes.

With Unsettings you can switch off the global menu and the overlay scrollbars used in Unity.

In addition to just applying the settings Unsettings lets you to save your settings into and load from a text file (JSON format) so you can easily backup you settings or copy them to a different account. 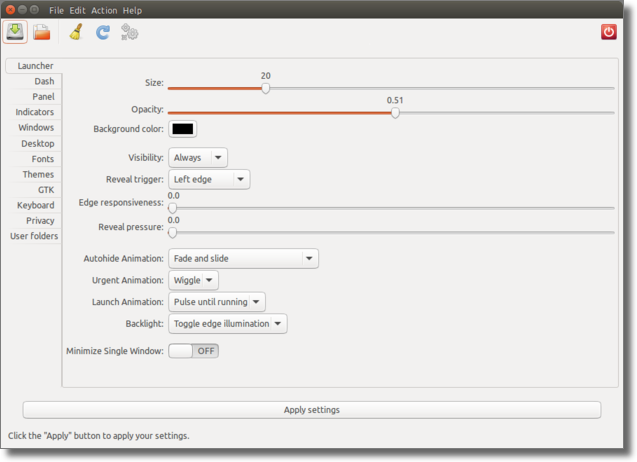 As far as I know there aren’t any critical bugs in Unsettings.

If you find a bug in Unsettings have have an idea how Unsettings could be improved please report it at the bugtracker at Launchpad so that I can have a look at it. Thank you.

All software packages needed by Unsettings are installed by default on Ubuntu.

Have a look at the project page at Launchpad , too.

If you want to help to translate Unsettings to other languages go to the translation page at Launchpad.

To see the list of people who contributed to the translatiosn you are using go to Help –> About –> Credits in Unsettings.

You can use Unsettings under the conditions of GPL v3 or later.

If you add this PPA to your software sources Ubuntu’s Update manager will automatically install newer versions of Unsettings, when they are available.

Depending on how busy the Launchpad build servers are it may take a few hours for the PPA to get new packages after a release.

If you rather want to download the files manually here they are:

The source code is available from the Bazaar repository at Lauchpad